Home Living A Model Of Service

A Model Of Service 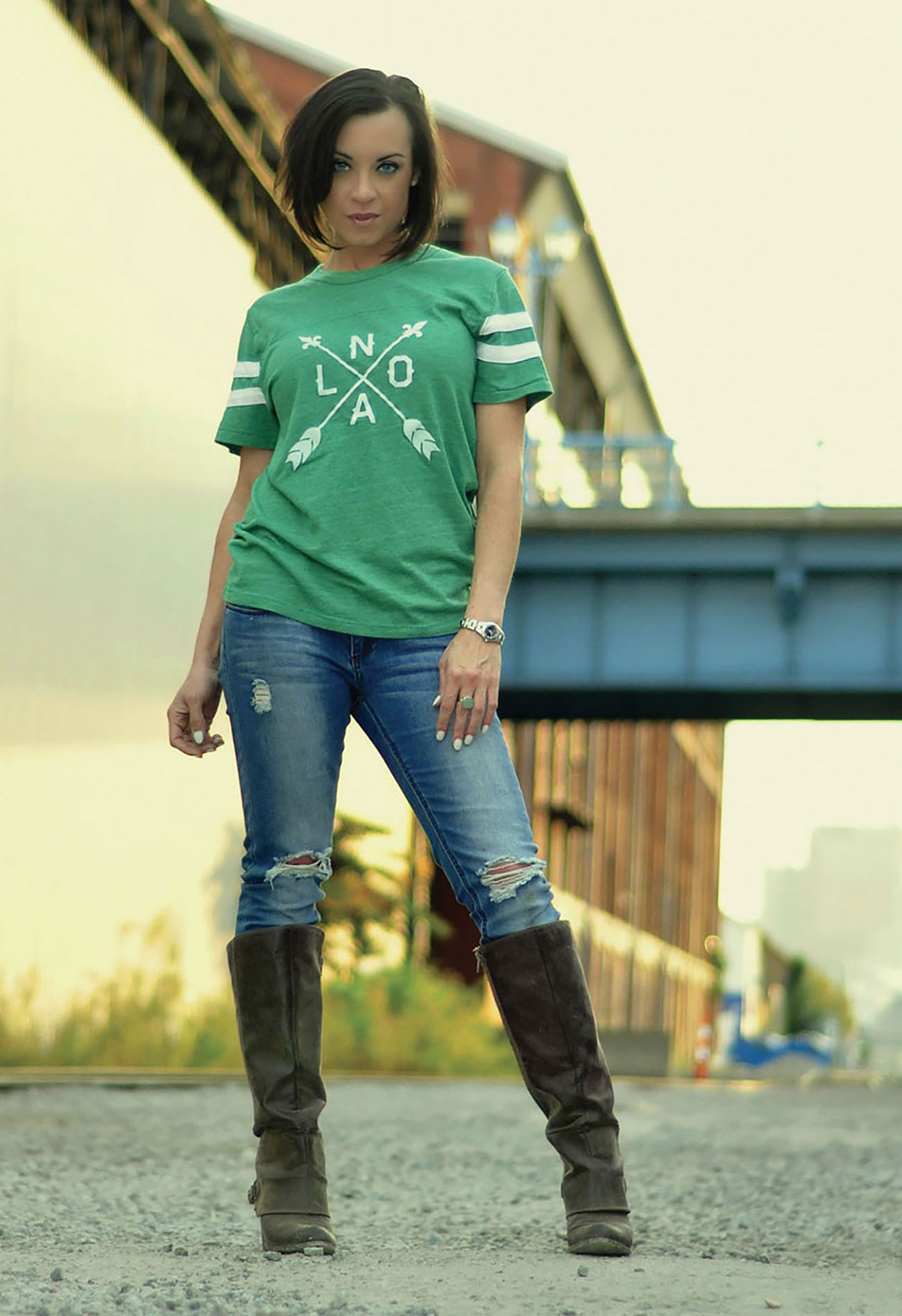 Helping others can be one of the best creative outlets in the universe. Jesse Solomon wasn’t sure at first where her talents and creativity would lead her, but it seems everything she touches benefits others.

As director of programs for The Woodlands (Wexford, Pa.), Solomon is charged with helping push forward the mission of the facility, which is located in the northern suburbs of Pittsburgh. That mission is “to enrich the lives of children and adults with disability and chronic illness,” a mission she truly sees as her passion.

There are other aspects to Solomon’s life as well. She is a co-founder of the 412 Project, a photography-based creative outlet, as well as a part-time model to help out some of her friends. Nothing she does is without creativity or heart, and it goes back to her upbringing.

Solomon grew up in Pittsburgh and graduated from Mount Lebanon High School. Not really sure what she wanted for a career, she attended community college. She started out as an art major and waited tables on the side. While the money was good, the job was uninspiring.

“I knew I wanted to go to college, but I wasn’t ready yet,” Solomon remembers. “So I ended up going to AmeriCorps NCCC [National Community Civilian Corps.]. It’s all service but NCCC is just for 18–24-year-olds. You take 10 months off from your life, you pile in a 15-passenger van, and every six weeks, you go to a different city and do different service projects.”

Solomon spent her time with NCCC helping with disaster relief, hurricanes, cleaning up neighborhoods and schools, coordinating environmental projects and facilitating neighborhood safety. However, one particular experience at a camp in Missouri inspired her life’s direction upon her return to Pittsburgh.

“I was very happy, but I realized it wasn’t going to get me to my end goal…”

“It was an all-accessible facility for children and adults with special needs and disabilities,” Solomon explained, “and I knew that’s what I wanted to do for the rest of my life. I wanted to run my own camp for kids and adults with disabilities. The only way I knew how to do that was to go to school to become a special education teacher.”

Solomon received her degree from Slippery Rock University (Slippery Rock, Pa.) and then found a job as an autism support teacher in Mount Lebanon School District. She soon realized that wasn’t her intended path in life.

“I was very happy, but I realized it wasn’t going to get me to my end goal of having my own nonprofit. So I went back to school outside of the education route. Most people want to get their master’s or doctorate in education to make more money. I got it outside of education because I wanted to something other than being a teacher because if you don’t get a job in the fall, you don’t have a job. So you’re subbing or bartending, etc. I was getting year-to-year contracts, so I never had job security.”

Solomon returned to Slippery Rock and earned her master’s degree in adaptive physical activity and disability research. She was ready to do more with her students: working with their minds and their bodies, as well. She could now adapt to any kind of physical activity to an individual’s needs.

Unfortunately, no jobs existed for Solomon at the time she earned her degree, so she accepted a teaching position in North Carolina until a call from The Woodlands came. She was more than ready for that call.

“I had a phone interview for two hours with the executive director,” Solomon remembers. “I remember it was the end of January, it was freezing cold. We had an ice storm that night. I ended up getting in my car and driving eight hours that night and showing up on their doorstep Saturday morning, saying ‘you met me on the phone yesterday, and I just wanted to come and tell you that my competition for this job are all of my classmates.’ We all had graduated. None of us had jobs. We were all applying for it. I said, ‘I want this job, but my classmates are amazing, and they are just as talented. They are just as knowledgeable, but I don’t think they are as passionate. But no matter who you decide on, the organization and what you guys do means so much to me. I want to make sure you make the right choice, even if it isn’t me’”

“I said, ‘I’ll be perfectly fine getting back into my car and going back to my teaching job in North Carolina because I do love it, and I was teaching special ed down there. But I want to make sure that you don’t say, ‘I wonder if Jesse would have ever worked out.’ So I had a six-hour interview, and then I left with the job.”

Solomon is part of the strategic planning team for The Woodlands. The campus contains campgrounds, ziplines, and other activities for both children and adults of all disabilities. They offer after-school activities, weekend retreats, and summer camps. The campus can also be used as respite care for families.

Solomon is comfortable in her new leadership position and has opened up new opportunities by networking and getting to know other business leaders in the community. She gravitated toward the creative realm and magazines for the most assistance, having been an arts major in a former life. Now that she is settled in her career, her own creative vibes have resurfaced, and she has found projects that are fulfilling, while still managing to help others.

“I started taking pictures, and I got contacted by RAW, a grass-roots art gallery. They wanted to display some of my pictures, so that was a big confidence booster because I’m like ‘Oh my pictures, who wants to see my pictures?’”

The opportunity thrust Solomon back into the study of photography, which she hadn’t studied since her community college days. From there, she formed a small community of local photographers on Instagram. She met with them and would learn from them. She then found another group called Steel City Grammers, as in “Instagram,” who would meet up and take pictures together. From those friendships, the 412 Project was born.

For the 412 Project, everyday photographers make empty places in Pittsburgh more beautiful with their photos. Their first project was the abandoned Welcome Kiosk outside Gateway Center in Downtown Pittsburgh. Members of the 412 Project received permission to occupy it with pictures from local photographers and hashtag the result with #412Project. The project would then pick 20 photos to display as a contest, and if it was successful, they would hold more rounds. It was a huge hit, so much so that the owner of the space, who was allowing The 412 Project to use it for free, replaced them in favor of paying renters.

The project continues in other spaces, and Solomon is proud of what she has developed.

“It was like we were cultivating this underground community of artists that didn’t ever consider themselves artists. Now most of them, when they come to our events, have bought cameras, they’re selling their photography on Etsy, they’re making art out of their photos, and it’s really been cool.”

Another way Solomon has used her creative outlet—and helped her friends out yet again—is by modeling.

“When you hang out with a bunch of photographers,” Solomon said, “they usually get sick of taking pictures of buildings, and they want to start taking pictures of people. So I kind of fell into modeling to help a lot of these artists build their portfolio. They didn’t necessarily want to purchase somebody to model for a couple hours, and they really didn’t have experience doing that. So because I was their peer taking pictures, they felt a little more comfortable with me being their model because when you work with a professional model, it can be intimidating if you’ve never taken someone’s picture. As people started publishing my photos, then people started seeking me out.”

Solomon’s life theme is one of service, no matter what she is doing. It runs true to a motif she has always stuck to, finding your who and your why.

“I have taken a lot of different avenues to get there. For me, it’s taking a good look in the mirror really, and seeing who you are, what your talents are, what your weaknesses are, and really taking stock of what you have to give. It’s looking at what you are doing, and it’s really just a math equation of what you have left. After you get done with your job, and your family, and your friends do you have more to give? And I always had so much more left to give!”