Parenting is hard. In my opinion, parenting sober is harder. Add twins to the mix, one with significant health issues, and you have my life. 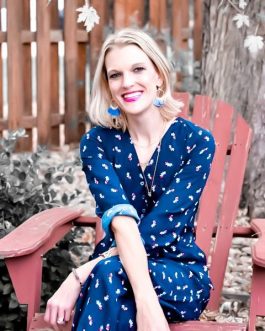 By the grace of God, I got sober before I had my twins. If I hadn’t, I would never have been able to go through a pregnancy sober. I didn’t know how to stop drinking. Nothing stopped me, not even my dream of the perfect family. I finally reached that ultimate hole of desperation. I knew I could no longer live the life I was living. I did what I had to do. I stopped drinking.

Getting sober was the hardest thing I had done in my life. Little did I know that it would seem easy compared to the things I was about to go through. My husband and I knew that we were struggling to get pregnant before I got sober. We’d done rounds of Clomid, a medication that stimulates ovulation. We tried to time sex based on the days that I ovulated. It didn’t work. My drinking didn’t help. In the middle of all of our fertility treatments, I took a break so I could go to rehab and figure myself out first.

Now that I was sober, I had to relearn how to do absolutely everything. It was like being reborn and crawling back into the world as a baby. The stress of infertility and all of the hormone treatments that go along with it is out of this world. My body had not been regulated in years. I went through four rounds of IUIs, a type of artificial insemination where my husband’s sperm was washed and concentrated then placed directly in my uterus around the time my ovaries were releasing their eggs. None of this worked. We realized our last hope would be IVF.

Hundreds of needles, hormone shots, bruises on my stomach and butt, doctor’s appointments, and agonizing hours led us to our positive pregnancy test. We cried with joy in our bathroom, staring down at the two pink lines. After years of crying not out of joy, but out of sadness and despair, this feeling was welcomed. We were elated.

Our first ultrasound showed two embryos! But one was measuring 10 days behind the other and did not show a heartbeat or any signs of being viable. All at the same time, we were told that we were definitely pregnant, but that we were also going to miscarry at the same time.  How does one react to that? I was so confused. I was so joyful that the IVF worked, but I was devastated that one baby wasn’t viable. The doctors said it would probably be “vanishing twin syndrome” where one embryo is simply absorbed into the other. I was absolutely convinced that they were wrong. I knew there were two babies in me. I was positive that the unviable one was going to make it. 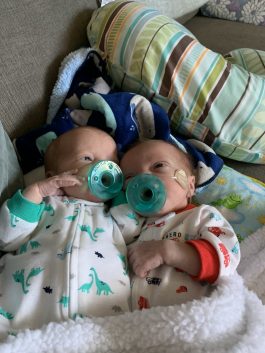 Our second ultrasound proved the doctors wrong. It was twins. There were two heartbeats. I was right all along. Twin pregnancy quickly became another thing that seemed harder than getting sober. It was awful. I was so sick, miserable, tired. Luckily, I’d never been pregnant with a singleton pregnancy, and I had nothing to compare it to. The suckiness was my normal. I could nap for 3-4 hours on my off afternoons and still go to bed by 8 pm.

I had a two-week period where I felt great, around 18-20 weeks. From there on, it was agony. My second trimester was basically my third, as I was measuring 32 weeks by the time I was only 24. I’m 5’9, 135 pounds normally; very slender. I was all belly. It was a 50-pound bowling ball just sitting on my hips. I was homicidal at work, throwing F-bombs around on the norm, and concerning my boss since I was normally a very put together, welcoming person.

At 33 weeks, I went to the hospital for 8 days for pre-term labor due to blood pooling around my cervix. I had to take magnesium, which is the worst drug. I felt like my body was made of steel, unable to roll over. When I did move, I was nauseous and sweaty. I had to have monitors on my belly 24/7, which slipped off constantly. The beeping of the machines was never-ending and haunted my dreams.

I recovered; the babies were safe, and I made it to 34 weeks (a milestone for pregnancies with multiples). I was released on bed rest and stayed at home like a beached whale until my water broke at 36 weeks 2.5 days. The twins were delivered vaginally after relatively painless labor considering all that I had already gone through. Doctors were shocked they stayed in that long. I was shocked I didn’t murder anyone and end up in jail. 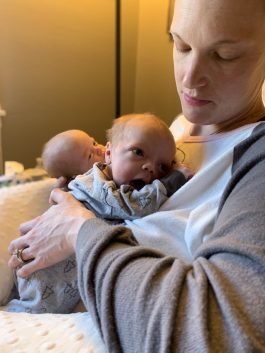 Baby A was a boy and arrived at 10:59 am on January 25, 2019. Baby B arrived 21minutes later, at 11:20.  As I am trying to shove Baby B out, a nurse comes over, concerned. “We have to take your son to the NICU immediately,” she says. “Something is terribly wrong. They can’t get the tube down his throat to suction the mucus out like normal.”

I was terrified. Terrified that Baby A wouldn’t make it and terrified that something would also be wrong with Baby B. None of this had been easy. From infertility to rehab, to IVF, to a twin pregnancy. I was tired. I was ready for a break. But everything was just beginning.

Baby B was completely healthy with no complications. Baby A had a tracheoesophageal fistula and tracheomalacia. He had to have surgery immediately. Within 24 hours of being born. I didn’t even get to see my babies for 6-7 hours after they were born because I was so sick. The post-pregnancy was worse than the actual delivery. I was throwing up, woozy, dizzy, weak. I couldn’t sit up. I couldn’t get in the wheelchair to go to the NICU. Nothing was easy.

Baby A stayed 17 days in the NICU. Juggling new parenthood with one twin at home and another in the NICU was insane. Breastfeeding one at home and then pumping enough to bring to the other in the hospital took its toll. The logistics of everything seemed impossible. But we made it work. Within the first seven months of his life, our son had 4 near-death scares, three CPR resuscitations by my husband, two 911 calls, two ambulance rides, and multiple more hospital stays and surgeries. Not only was all of this happening, but I was dealing with a depression that was completely new to me – postpartum depression. About 1 in 9 moms suffer from this, and it still isn’t talked about enough. I felt guilt and shame that I was feeling so anxious and sad about having these babies. Was it even right that I did IVF?  Did we make the right choice? This wasn’t supposed to be so hard. The perfect family that I dreamt about was here, but it was nowhere near perfect. It was pushing me to my limits, making me yearn for the easy way out. The vodka or the wine called to me daily. I wanted to numb my feelings. I wanted to get wasted and forget the pain and anxiety that I was feeling.

But I didn’t. How did I stay sober through it all? I used my toolbox. You learn to put several tools in your toolbox when in rehab. I went to my meetings, I called my sponsor, I stayed in touch with my sober friends. It was even better when I could find new moms that were also sober, although it was few and far between. I prayed and meditated. I tried a sober gym, I tried yoga, I tried coffee dates with other twin moms. I communicated with my family that I was struggling. Most importantly, I reached out and helped others in need in order to keep my sanity. 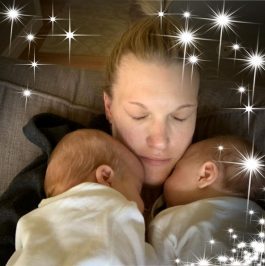 I’ve always wanted to help people. And that’s what I am doing now. Alcohol abuse disorder in women is on the rise. Mommy wine culture makes it seem like it is OK to parent drunk. It glamorizes it and makes it look beautiful. Jokes and memes are prevalent, showing how normal it is to drink and raise children. Are you one of these women? Do you feel that you are drinking too much or depend on alcohol in order to parent? You are not alone. There is a wide variety of resources for you. Social media has so many sober-curious groups. Groups for moms, dads, twin moms, single people, young people, older people. Everyone can find their niche on social media. There are 12 step programs galore. There are sober coaches, life coaches, recovery coaches, therapists, and so many options out there. The hardest thing you have to do is ask for help.

I thought getting sober was the hardest thing I would ever have to do. I realize that there are now a multitude of things that could be harder, but as long as I am sober, it doesn’t seem half as bad. I need to stay sober for myself first and foremost, but also for my family. I don’t want to parent drunk, depending on my vodka from the closet to get through the day. I don’t want my kids to grow up thinking that I drink because of them. The stigma needs to end. Mommy wine culture is not OK. It’s not your kids’ fault that you drink. It is something deep within you that you are suppressing. All you have to do is reach out, and ask for help. We are here to help you.