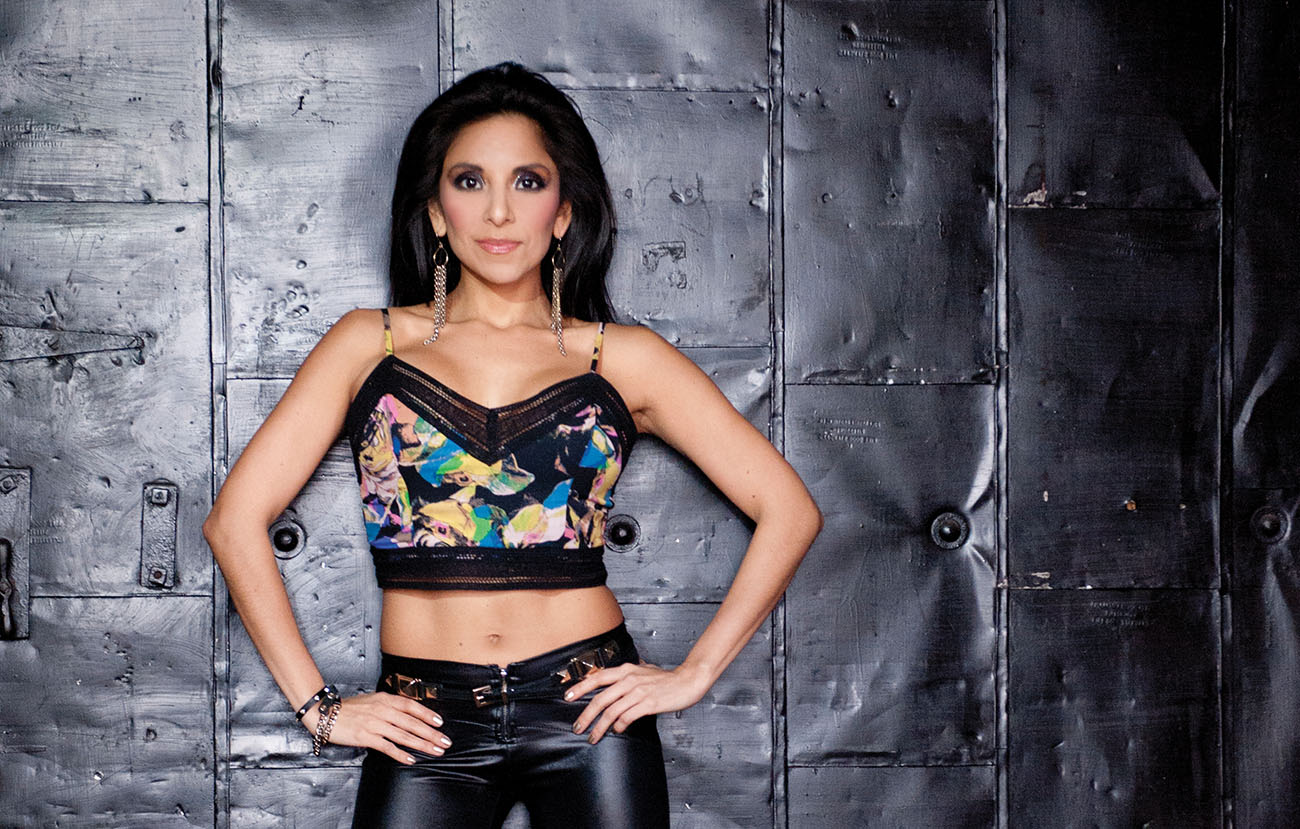 It’s been almost 20 years since I’ve heard the intoxicating sound of a live salsa band. Those nights of perfection—among other dancers who were dressed to the nines and ready to dance the night away—were like a scene out of a movie. Gracing the stage, surrounded by an array of percussion and horns, was the most beautiful face, hypnotizing the crowd with a voice as luscious as the Spanish that rolled off her tongue.

That was Sabrina de Matteo then, and today she continues to entice audiences as the lead singer of No Bad Juju. This is a woman who wasn’t made only for the stage, but she was also made to inspire. I had the chance to speak with de Matteo to uncover her passions, her journey, and how she uses her story to motivate all of us.

You have had—and continue to have—such a presence with your music, and No Bad Juju is amazing. Starting at age three, how did your passion for performing begin to manifest?

I was a really rambunctious child. And I actually was the one to choose the piano. I started gravitating to it when I was 2. Then my mom bought me one when I was three. I learned all the classical composers like Beethoven and Mozart, and it was just in me. I know a lot of parents have their children pick an instrument, which I think is brilliant. I think all children should have musical outlets or creative outlets. It was a way for me to express myself and emotions like happiness and sadness.

Growing up as an only child, this was a perfect fit for de Matteo. As she entered into adolescence, she “had a bit of a troubled childhood” where she “suffered with abuse and from trauma.” At this time, music took a back seat.

“When you are not happy with yourself and things are happening to you, you stop doing that which brings you joy. I lost my passion for music until I was about sixteen when I became the backup for Guaracha. This opportunity to perform gave me the experience of doing it, and making money by doing what I love was intoxicating. I realized I had talent and found something that gave me joy when so little in my life did. So the passion for music I once had returned.”

Being on stage since the age of sixteen—how was it to know and how did it feel, knowing that you brought so many different people together?

I was addicted to that power, addicted to the feeling of bringing joy to myself and others. When we are young, we may feel that we aren’t heard or seen by others or our elders. It felt great to be seen and heard. It was empowering.

Did being a component of Latin bands also strengthen an appreciation for who you were culturally?

Yes. I’m Peruvian. I was raised to be very proud of my culture. My mom used to make me dance all the traditional Peruvian dances at festivals. Dancing created my joy. I loved salsa, and I loved watching people dance salsa, knowing that we all had fun on both sides of the stage. This carried over because, through the performing, I was led to my first adventure in fitness: Zumba.

The Pittsburgh community was certainly grateful for the return of de Matteo’s passion. As she graced us with her talent, she was truly a part of many of our families. All the while, continuing through high school and delving into more acting, by senior year, de Matteo won a Gene Kelly Award, giving her a scholarship that led her to Point Park University.

“I had no real plans for the future. I didn’t know if I was good at anything. I figured that if I have this talent I should do something with it. I continued to sing with Guaracha, then Orquesta Tropical. I was also getting jobs through Docherty Talent and Modeling Agency. These things didn’t fall in my lap. I had to work hard, and I had to hustle. I had to, at times, accept failure and rise above it. It taught me a lot of life lessons very early, and I’m grateful for that.”

It seems as if in life, each next choice or option that comes our way brings us one step closer to fulfillment. How did accepting a role in Showboat affect you?

It wasn’t what I expected. After college, I accepted a role in ShowBoat to tour the United States and Canada. However, I realized, after a while, that although performing was my talent and I always wanted to do a national tour, my heart wasn’t satisfied. All the dreams that I thought I wanted like success, touring the world, being on Broadway, weren’t as important to me as love was. I was engaged at the time, and I chose to come home. I chose to create a life, not abandon music but create balance. I felt as if I knocked a few things off my bucket list, but when I closed my eyes at night, lying in a hotel room, I just wasn’t satisfied anymore. I knew it wasn’t for me.

So this experience led you to realize that the feeling of “home” was important?

It was. I was an only child, and I didn’t have a lot of family around. My mother was a single, working mom and she would work her butt off. She would travel all the time. There was no real home or sense of stability which is what I craved. She was the best, and I have no qualms about how I was raised. I wanted that feeling of security and love and I knew that I had to create it. So coming home was important. But, I don’t do well with not working.

And this is how No Bad Juju came to be?

Yes, No Bad Juju was created with several really talented musicians in the Pittsburgh area. We were contracted to be a house band, and it was a 4-day-a week job. The quality of music was and is excellent. However, it’s blues and old-school R&B, which I wasn’t familiar with at all. I had to stretch myself, going from salsa to opera to now blues; I had to become like a chameleon.

After all these years, the band has changed tremendously, it’s a great representation of every band member, and it honors each one’s experience and genre. Every person gets to shine and show off, which is really cool.

After returning home and creating the balance between her love for performing and craving love and stability, de Matteo’s spirit was about to be tested again. On the morning she and her mom were supposed to celebrate their birthdays, de Matteo got news of her mom being struck by a car. Over the next 24 days, de Matteo tried to remain busy and strong while her mother went through various surgeries. de Matteo was either at the hospital or on stage during this time. The time spent performing was her “release from all of that fear and anxiety.” After her mom’s passing, de Matteo was about to struggle but would come out stronger than ever.

How did the loss of your mother affect you and when did that final commitment to living again happen?

Remember, my mother was everything. Most of my family is in Peru. I have a great support system, don’t get me wrong, but in regards to a father or siblings, she was it. Because of that, all of my past sadness, issues, and trauma came crashing down, in addition to losing her in that way. After she died, I went into a serious depression. I started using alcohol to numb the pain. I was still doing some shows, but in 2012, I knew that I needed help, and it had to come from within. I know I needed psychotherapy, but I needed more because my insides were rotting. I was willing to try anything.

Was this when fitness became your focus?

Yes. A friend of mine introduced me to Shakeology, and it was as if after the first sip, I could feel the nutrients that I was lacking. I went through several programs, and I climbed back to my physical and mental health especially with the support of all the coaches. This is when I decided, once I was back on track, that I wanted to help others regain their life.

Being balanced mentally and physically, you do still have an incredibly hectic schedule between fitness coaching, music, and home life, which we all know can be exhausting. How do you manage all that you do?

First thing in the morning, when I wake up, I listen to personal audibles, just to get my mind going. I don’t let anyone else decide how my day is going to go. We may get a bad text, email, or phone call, and all of a sudden it’s like now my day is crap. I take control of my day first thing in the morning. Then I tackle the stuff I don’t want to do, to get it out of the way. Then I can concentrate on what brings me the most joy, which is the combination of music and coaching. I give equal time to both. But what truly drives me is my “why.” Why I’m doing these things. I honor a very specific mission of where I want to be in a year, where I want to be in five years. When I’m exhausted and can’t possibly do one more thing, I zone in on that “why,” and it pushes me through.

I’m a big fan of creating a springboard whether it’s a piece of paper or done in crayons. Jot down things that you want that you will make you happy, anything that you want. Make it clear, and it should include everything. Where you want to be, what you want to have, everything that’s going to make you happy. One thing that I learned from one of the coaches under me was to write a love letter to ourselves, the future you. So I wrote one to the future de Matteo and made it clear. At the end, finish it up by saying that you are proud of yourself, you’re beautiful, and you love yourself. Just writing those down is empowering. We don’t tell ourselves that enough. We don’t allow ourselves to be proud of ourselves and honor our accomplishments. We are used to minimizing the good that we do because it appears boastful. We do have the power, every single day, to make ourselves feel amazing!

You can find Sabrina de Matteo and No Bad Juju on all social media.

For more on de Matteo’s music and coaching journey, you can find her via:

For more information on No Bad Juju, please go to