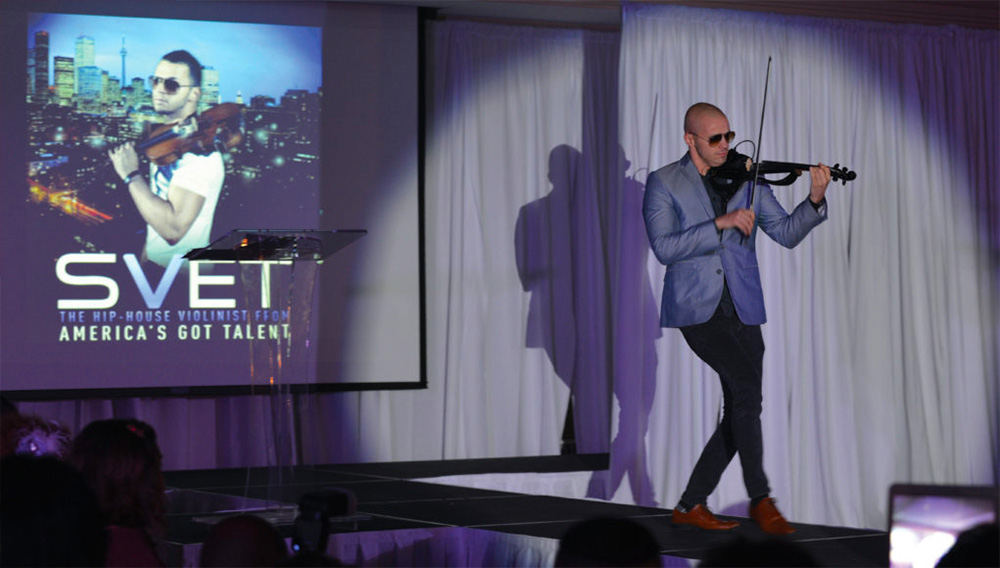 From the moment I entered the Inspiring Lives Magazine Launch Party, I felt the excitement in the air. From the red carpet to the music to the stylish people who filled the ballroom, I knew it would be a great night!

I was at the back of the room chatting with friends when I heard a familiar song, followed by a cheering audience. We all immediately moved closer to the stage where a solo artist in sunglasses passionately played an electronic violin.

As a musician, I know it’s hard to control the stage alone. Singers are usually needed to command the audience’s attention. However, it was easy for electro-violinist Svet Radoslavof, whose repertoire included popular tunes like Justin Beiber’s Sorry as well as some classic hits and even some Caribbean music that had us dancing in our seats. The performance was the perfect way to kick off the fashion show that followed.

Later, when I spoke with Svet about his music, he expressed, “I know I was given a gift, and I feel compelled to share it.” You can see the passion in his performance.

What you wouldn’t know from watching him on stage is that only a few months ago Radoslavof had brain surgery to remove a tumor. Just a few days after his surgery, he performed for the hospital and has recovered well. Now he is back on tour, sharing his talent and energy with audiences.

Leigh Solomon-Pugliano is a business development consultant and talent advisor for Straightforward Consulting, as well as the founder of Barrels to Beethoven.