1 POSTS 0 COMMENTS
A strong confident woman who is bringing the culture of France to us with her one woman show, in the fabulous Chansons show www.chansons.show and www.stefanierummel.com. Globally recognised as one of the most charming musical cabaret artists, in her shows you hear autobiographical stories about France such as: how we, eat, meet friends, approach life in another country. It is about the art of living, the ' savoir vivre' and the ' joie de vivre'. The journey goes from love to war and freedom and from childhood memories to adulthood. Various styles of French songs that became famous across the world can be heard: from jazz to pop from musical theatre to chansons, from singer songwriters and own songs to traditional songs. Audiences across the globe can’t help but be drawn in by Stefanie’s charm and charisma as she shares her own personal experiences. Speaking of her new one woman show, Stefanie stated: “I wanted to give audiences a taste of the French way of living without the need to travel and especially without the jet let! It gives people an opportunity to look at other cultures and reflect wonderfully on your own life and be inspired! How do we spend time? What is important to us in life?” Stefanie is taking this wonderful show to the Edinburgh Fringe Festival 5th – 21st August - which will give her the chance to share her story and talent with a brand new audience. Stefanie studied musical theatre professionally and then proceeded to deepen this knowledge in singing, dancing and acting in Berlin, London and New York. Now as an award winning performer, writing her own songs and material Stefanie is looking forward to appearing at the Edinburgh Fringe Festival and sharing her talents and ‘joie de vivre’ with its visitors. 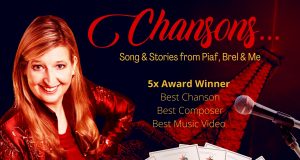