1 POSTS 0 COMMENTS
Cheryl “Action” Jackson is an author, speaker, TV host and a multi-million dollar successful social entrepreneur. Just as her nickname suggests, Cheryl Jackson is a woman of ACTION! This matriarch has struggled from experiencing hunger to providing more than 12 million meals to children and families through her award winning organization, Minnie’s Food Pantry, a charity she founded to honor her mother, the late Dr. Minnie Hawthorne-Ewing. Under Jackson’s leadership, her staff and volunteers have provided over seven million meals and has expanded operations from a small 500 square foot building to over 28,000 square foot building of love and hope for the hungry, having served over 12 million meals to those in need. Jackson has received $100,000 from Oprah Winfrey, Mark Cuban, and Mark Burnett in support of her charity. Jeffrey Katzenberg and DreamWorks have also recognized Minnie’s Food Pantry and Dr. Jackson for her work in the community and donated $30,000 to help further the organization’s mission. She has appeared on The Ellen Show and her charity was awarded $30,000 and a new vehicle from the megastar. She and #TeamMinnies were the first winners of the American Bible Challenge game show. Dr. Jackson has appeared on Good Morning America where she was honored with the Home Town Hero Award by singer Rihanna, Steve Martin and Jim Parsons who also came to serve with her. She has been recognized and featured nationally in Essence, Jet Magazine, ABC News, NBC, CBS The Talk, Oprah Winfrey.com, TBN and The Steve Harvey Show. Jackson’s heart for people makes it easy for her to Take Action during times of need. During the devastation of Hurricane Harvey on the neighboring city of Houston, TX, Jackson led truckloads of food, toiletries, clothing and supplies to those affected by the storm. Under the direction of Dr. Jackson, Minnie’s Food Pantry is still boots on the ground, and has since opened a facility in Houston, TX. Jackson has interviewed A-list celebrities like Oprah Winfrey, Jennifer Garner, Jennifer Lopez, Will Smith, Viola Davis, Magic Johnson, Pastor Donnie McClurkin and numerous others. Jackson is an author and a writer for the Huffington Post. She resides in Texas with her husband of 35 years. She has two sons and daughters and 4 incredibly beautiful grandchildren. Most importantly Jackson loves God and she gives him all the praise for the doors that have been closed and opened in her life.  CONNECT WITH ACTION:  Follow Action on Twitter @CherylAction Like Action on Facebook: CherylActionJackson  Websites: www.cherylactionjackson.com www.minniesfoodpantry.org 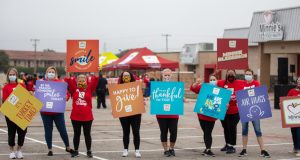