1 POSTS 0 COMMENTS
Becca Gardner, founder and CEO of Alt Distilling and innovator behind NKD LDY, is committed to making lasting changes to the culture of drinking, by creating a safe and emotionally rewarding experience through her non alcoholic spirits and promoting realness with her authentic brand message. Having a previous career in strategy consulting, Becca found herself frequently working while traveling and dining with clients, which led to an alcohol-heavy lifestyle. Struggling with burnout after a decade in the field, Becca took a sabbatical in London where she was romanticized by the accessibility of non alcoholic beverages. Always one to stand up for a cause, she left wanting to make this type of lifestyle choice easily attainable for those in the States, where drinks are often encouraged in both work and social spaces. Becca was inspired to create a brand that reignites the social aspect of drinking without the pressures or induced courage of alcohol. Recognizing that many nondrinkers avoid events simply because of the questioning they’ll receive, Becca has created a space where what people drink is not the focus and is, in fact, rather inconsequential. Instead of people hiding behind their glasses, through NKD LDY, Becca has created a culture that encourages bravely owning your own strange, unique, and authentic self by inspiring people to get real, step into their power, and let go of their vice by ordering a drink “naked.” With a Bachelor of Arts degree from Denison University, where she studied anthropology, studio art, and women’s studies, Becca has a vast understanding of human behavior. She also studied at New York University at the Leonard N. Stern School of Business. Throughout her career as a strategy consultant, she was in the top 10% of strategy managers at Monitor Deloitte, worked with Fortune 200 clients, and visited Singapore as their chosen representative at a United Nations conference. She’s served on many boards for issues related to human trafficking and sexual and domestic violence, with her most current involvement with Kentucky Refugee Ministries. Becca is also a certified yoga teacher who loves to create art in various mediums including design work for NKD LDY, as well as spend time with her screenwriter and film producer fiancé and their parti poodle. 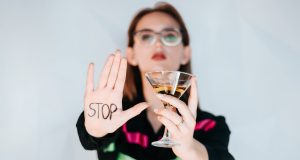