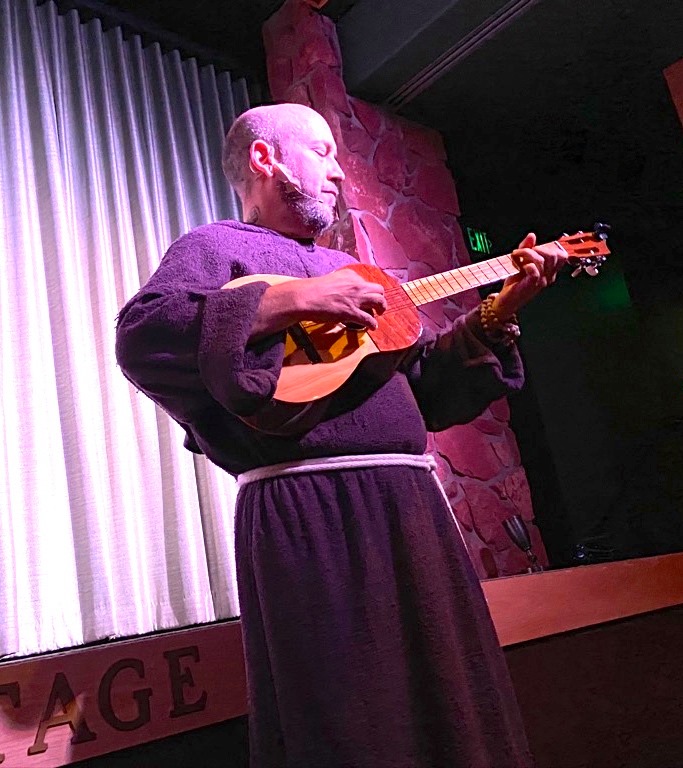 “Stay simple, stay humble, stay awake” is one of many transformational themes that connected with me most during New York Times’ best-selling author James Twyman’s ‘Brother Sun, Sister Moon’ musical that toured the country earlier this year. Even though I was part of his on-the-ground support team while he and a friend travelled through 18 cities with no money in imitation of St. Francis of Assisi, and even though I really loved the message they were working to inspire — compassion, unity and peace — I wasn’t sure what to expect as I sat in the front row of the audience to take in this one-man musical.

I arrived at the Center for Spiritual Living in St. Louis, met by a few lovely ladies who were already waiting for me, welcoming me with open arms. Literally. They were alerted that I was on James’ team for the tour and were given instructions to save a front row seat for me and to send me back for a quick hello with James. Besides his smiling face, I noticed that he was barefoot. I couldn’t say that I was surprised by the level of authenticity James was going for as he personified St. Francis of Assisi in the musical, though I still found it rather brave and vulnerable. This was the dead of winter, after all, so his feet weren’t sporting a tan.

As I was ushered into the seating area, I was struck by the unmistakably happy, friendly, welcoming energy of the guests. Smiling people of all ages were milling about, genuinely excited to be taking in such an inspirational show by a best-selling author who was so committed to inspiring peace that he gave up all of his cash and credit cards and hit the streets to take his show on the road. Their warmth was contagious, and their anticipation created a true buzz in the air.

James is a charismatic, generous performer whose gift for playing instruments and singing alone is remarkably moving and inspiring. During the show we laughed, cried, and even sang along at times. I didn’t expect the musical to be so engaging and fun. It was impossible not to feel inspired to be even just a bit like St. Francis, and to be more open-minded, less judgmental, and more brave in our faith and in finding ways to bridge divisions, not create them. James’s performance just stole your heart, pulled your inner child out into the light, and filled you with such hope, delight and possibility —  the kind of possibility that gently uncovers your inadequacies and makes you want to be a better person, even making you believe it’s entirely possible that you can.

“Stay simple, stay humble, stay awake” is a message we first heard during the song “Stay Simple.” It was underscored later in the performance, and it resonated with me most. During these times of unprecedented political division, racial tension, and drastic cultural change, we can all gain by finding ways to keep our lives, thoughts, and being more simple. Humility is hard to come by in a world so focused on insta-fame and social media picket fence posting. Being awake has never been about meditating on a mountain top, partaking in a wheatgrass juice fast, surrounded by sage and crystals. As James’s performance expressed, being awake occurs in simple shifts in our perspective and our choices that bring us into alignment with what we already know deep down is the right thing to do. In times of doubt or overwhelm, I find myself reaching for this message: stay simple, stay humble, stay awake.

“Brother Sun, Sister Moon” is a musical based on the life of St. Francis of Assisi. It was presented by James Twyman across the US in the early 2020. More info about the show, along with video clips, can be found at www.stfrancismusical.com