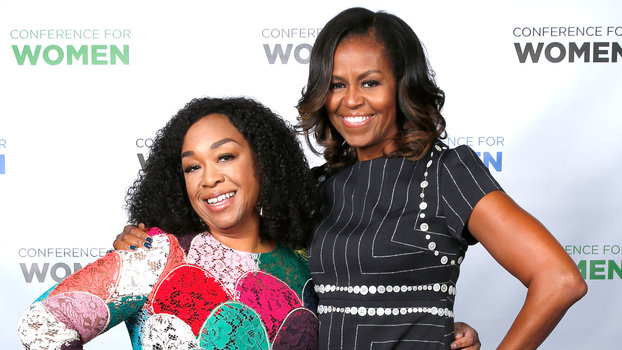 Lines around the block. Twelve thousand women (and men) anxiously waiting for the doors to open at the Philadelphia Convention Center. It was the day many of us had been waiting for: the 2017 Pennsylvania Conference for Women.

As I entered the press room, journalists from various media outlets were quietly setting up their phones, laptops, and tablets to spread the messages of empowerment, love, and inspiration that several amazing women were about to share.

Each one of these women brought with them a distinct characteristic as they took the stage, and as we were all waiting with anticipation for the main headliner, Former First Lady Michelle Obama, the sound of feverish typing began.

Here is your intimate view from the press room.

From the moment Carla Harris took the stage, her smile and joy overtook the room. Her voice ringing loud and clear, Ms. Harris had quite a presence. Every person could feel her sheer power as she delivered not a speech, but the advice she would give her twenty-five-year-old self.

“The first thing I want to tell you, Carla, is own your power. Never let anyone make you doubt that which is uniquely you.”Just with hearing this first piece of knowledge, I was in awe. Owning your power is certainly something that Carla Harris knows well. She lives that belief every minute.

Ms. Harris is a Wall Street powerhouse as a vice chairman at MorganStanley.This, however, is not the only hat she wears. Appointed to chair the National Women’s Business Council by President Obama, this woman has and continues to receive countless honors and awards, while also being the author of Strategy to Win and Expect to Win.

Impressive as she is, Harris continued with ease. Her list of advice left no stone unturned and covered every topic in a no-nonsense way that we can all follow. With these statements, she ended her interaction with us as I could feel the self-esteem of each individual grow and fill the room.
“Take risks.”
“Fear has no place in your success equation.”
“If you meet who you are interested in and they tell you that you are too much for them, they are right. Do not dim your light for someone else’s convenience.”
“Celebrate your victories often.”
“You don’t ask, you don’t get.”

Yes, we have all come to know the name Shonda Rhimes. This award-winning writer and producer shares her creative work with ABC Series such as Grey’s Anatomy, Scandal, and How to Get Away with Murder. From Golden Globes to GLAAD, The Producers Guild of America to the NAACP, Rhimes is a woman who exceeds expectation and continues to receive honors and awards in an industry that was male-dominated when she began.

Not only was Rhimes speaking to the attendees of the Conference, but she also had the honor of conducting the live interview with Former First Lady Michelle Obama in front of the crowd. Talk about an exhilarating yet—for many of us—a would-be nerve-wracking moment! Rhimes showed nothing but fearlessness.

Gracing the podium, Rhimes declared, “There’s a reason why I say I haven’t faced any obstacles, and it’s a real, true, honest reason.I have never NAMED anything an obstacle.”

Surprisingly, this introvert who formerly stated that she had a fear of public speaking named her fear “opportunity.” How we name something dictates how we deal with it. We most often allow our fear to be in charge of what those names will be. We are afraid to call ourselves ‘brilliant’ because maybe someone will think we’re bragging. We’re scared to define ourselves as ‘beautiful’ because maybe someone will disagree and hurt our feelings,” and the list went on.

Closing her speech, Ms. Rhimestold us to “rename our fears, summon some courage, and stand up. Go out there, and name the world your own.”

As a research professor and scholar, Dr. Brown has created thought-provoking studies such as investigating courage, shame, and vulnerability. Intelligent, witty, and downright honest, Brown has given some of the most-viewed TED Talks to date.

What I found remarkable as the University of Houston professor was speaking was that she was as authentic as they come. As she recounted a story of public speaking engagements for which she was being requested, a smile grew on my face.

“I received a request from a church, but they said I couldn’t swear. Then I received a request from a company, but they said I couldn’t mention faith. Sometimes I do both in the same sentence.”Brown certainly speaks the truth.
This is a woman who doesn’t compromise who she is and trusts her gut when it comes to making a decision.She is the role model of authenticity and urges others to do so as she helps them to love themselves and evolve through her online platforms.This three-time New York Times best-selling author is the founder and CEO of COURAGEworks and Brave Leaders Inc. where she is using her findings to educate and empower individuals, families, and entrepreneurs.

Brown demonstrated the importance of knowing who you are and being yourself. Living your truth breeds happiness and success. She left us with sound advice.

“It’s ok to be vulnerable. It’s a part of you. Be courageous with living your life.”

It was time. As Michelle Obama arrived on the stage to chat with Shonda Rhimes, everyone in the press room acted like every other crazed fan in the Convention Center. I have never witnessed such excitement in one place. Funny and real, Obama brought the message of strength.

Not only a successful attorney, Obama is known for her various initiatives to fight childhood obesity, support veterans, and inspire the next generation to seek higher education. Most importantly, she is a wife, mother, and at one time, the bread-winner of the family.“I wanted my girls to have the most normal life possible.”

While receiving many cheers, this incredible woman hit the nail on the head when asked whether she sees women being labeled as soon as they fail.

“Absolutely.”She continued to talk about the bar moving.“Once you hit it, it moves again, and we are seeing it right now quite frankly.It is amazing to watch. I want women to watch this. I want women to pay attention. This is what happens when we don’t stand up.”

Exuding confidence, the Former First Lady has no problem sharing her experiences and being the model of strength for women, young and old. She had the crowd feeling their own power as she gave the best statement of the conference, while also giving us our challenge.

“I’ve seen a lot of imposters at a lot of tables. And when you’re at the table and you realize ‘oh you are a fool and I’m worried about raising my hand?’But shame on us if we sit by and let an imposter talk us down. You see wrong happening, and you sit by quietly because you’re afraid to fail? That’s what I want to challenge us as women to be . . . to speak up.”

With the wisdom of Ms. Harris, Ms. Rhimes, Dr. Brown, and Former First Lady Obama, we can continue to plant the seeds of excellence for the next generation of women. Having attended the Pennsylvania Conference for Women for several years, the message reigns true: Confidence, power, value, and worth is within each one of us. Tap into those characteristics, and there is no stopping you!