Shalonda and her young daughter stood in the doorway of the empty apartment. Home. A safe home. It was a home that was far from the domestic abuse she had known just weeks ago. Stunned by the generosity of a family who had simply handed her the keys, no strings attached, Shalonda hadn’t thought about the need for furniture, much less pillows or a trash can. She was simply happy to have a place to call her own.
On leave from her career as an American Airlines flight 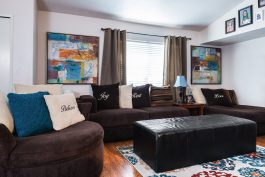 attendant, Shalonda was eager to make good use
of the hours her daughter was in school. Every day she walked a short distance from her apartment to the Covenant Church garage sale warehouse. A garage sale event was coming up and they needed help sorting through the items, and she was more than willing to lend a hand. After several days, the other volunteers learned Shalonda‘s story and started sending things home with her each afternoon. She was happy to receive the items, and as she began arranging them in her new home she referred to the new-to-her treasures as “love decor.“
Shalonda could easily see the difference that these home goods had made in her life, but she was still surprised when she felt a call from God to help other women coming out of abuse in the 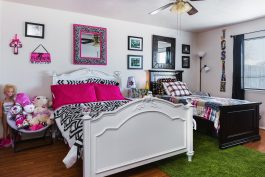 same way. But she knew it was the right path, and as she began sharing her vision with friends and family, items began showing up at her door. First, it was a rug and small trash can, and then gradually more and more furniture and decor was provided. Simultaneously, Shalonda began speaking to and partnering with other community organizations to help launch her idea into reality. Connections at Dwell with Dignity provided inspiration for her program, and the staff at Denton County Friends of the Family provided her with the clients who needed her services. She now partners with three domestic violence agencies in the Dallas/Ft. Worth metroplex.
When it came time to give her new organization a name, Shalonda opened her Bible. She read Haggai 2:9 and felt an immediate connection to her own story and her new mission.
The glory of this latter house shall be greater than the former,’ says the Lord of hosts. ‘And in this place, I will give peace,’ says the Lord of hosts. LatterHouse Decor was born. Shalonda now works with two interior decorators, using donated items and
furniture found at local garage sales and online market places to finish each project. 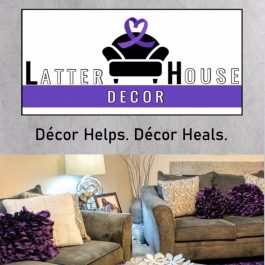 Since they began in June 2015, LatterHouse Decor has completed over 30 home decor installations and is waiting on the next client to receive her keys. Their work is focused specifically on women and children who are coming out of abusive situations, and Shalonda‘s own story of survival is now one of advocacy. Whether she is at work, with her family, or with a Latterhouse client, her life is a conduit of help and hope.