Dayna Delgado: Through The Photographer’s Lens 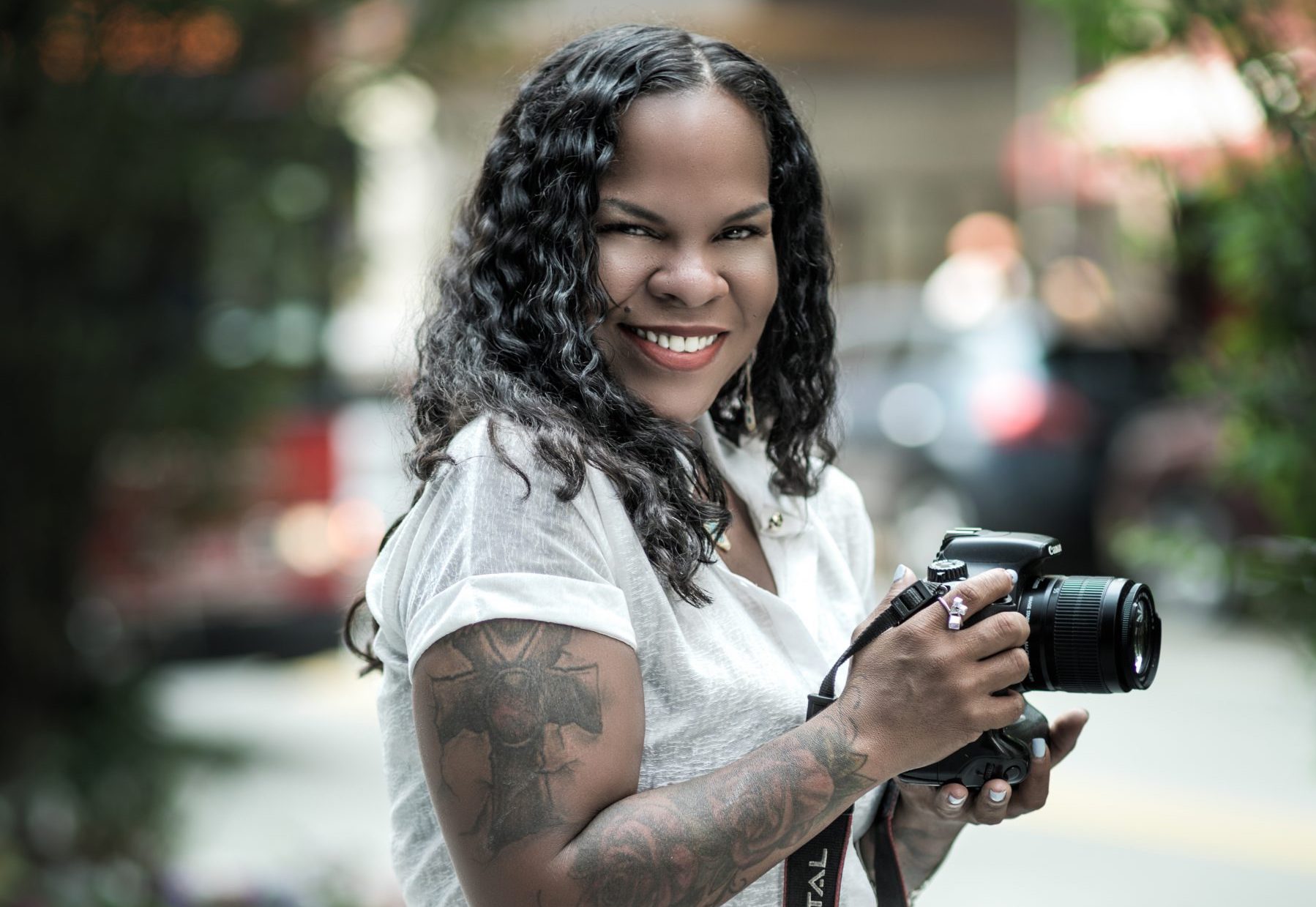 Well-known Pittsburgh photographer Dayna Delgado certainly should be photographing politicians, celebrities and Pittsburgh’s biggest galas, as the leader of her own photography company, WEDDINGS BY DAY. She just didn’t think she “deserved” to do all this, until recently. Now 44 years old, the woman behind the camera wasn’t sure who her biological father was until a few months ago. She thought she had come from “evil,” as she described a man who would beat her mother to the point where Delgado was this close to calling the police. The same man, according to Delgado, would beat her and her brother when they were teens. Delgado recalls the man placing her on punishment “for two years just because I got a ‘D’ in a class instead of the ‘C’ or ‘B’ or ‘A’ that he thought I should have gotten.” But after all, he was their father, Delgado said. The police were never called.
But what about the other man? The first man that Delgado was introduced to when she was a child, whom she called her father? The one that was present in her life all the way until age 13? The one who was considerably better to Delgado’s mother, although the man was married to another woman the entire time? Sound confusing? Well, throw in that apartment building on Ann Street in Homestead, where river rats would sometimes make their home…under the young Delgado’s bed. “It was a terrible, nasty place, a terrible place for a child to grow up,” Delgado recalled. “We lived by railroad tracks, so there were many nights we had rats in the apartments, roaches,” and that time when a river rat was, “gnawing on my brother’s bed, chewing the wood up.”
Finally, Delgado’s mother moved them out of that apartment when Delgado was 10, and moved “up the Hill” to an apartment on Maple Avenue. “But we were still poor,” Delgado remembered. “My mother raised us on welfare, food stamps…we didn’t have the clothes other people had,” which led to teasing at school, Delgado said. Then there was the pregnancy, right after Delgado graduated from Steel Valley High School in 1995. A decade and a half later, it was Delgado who noticed that her third child, a son, wasn’t developing properly. By age 1, Delgado’s son was diagnosed with autism and sensory disorder, forcing her to quit her job as a receptionist. So, by 2012, with money hard to come by, a sometimes-loving-and-other-times-painful childhood, three children and not knowing who her real father was affecting her ability to know “who she truly was,” how did Dayna Delgado turn out to be one of the most sought-after photographers in Pittsburgh? “I just knew I had to do it. I was the only person that had my back,” Delgado said. “I knew that if I didn’t do it, it wouldn’t get done. To me, it was a life-or-death situation. If I didn’t figure out a way, my kids wouldn’t eat.”
That “it” was going to area bars and clubs around town, setting up photo booths there, and taking photos of patrons (and instantly printing their color picture), charging a fee. People always come to the clubs looking their best, and they want to make sure it’s documented. Delgado’s profile began to rise, and she started photographing formal events and doing portraits for students. In 2017, she joined the New Pittsburgh Courier, an iconic African American publication, as a freelance photographer. Since then, she’s been front-and-center at many political events in Pittsburgh, documenting the actions of mayors, state 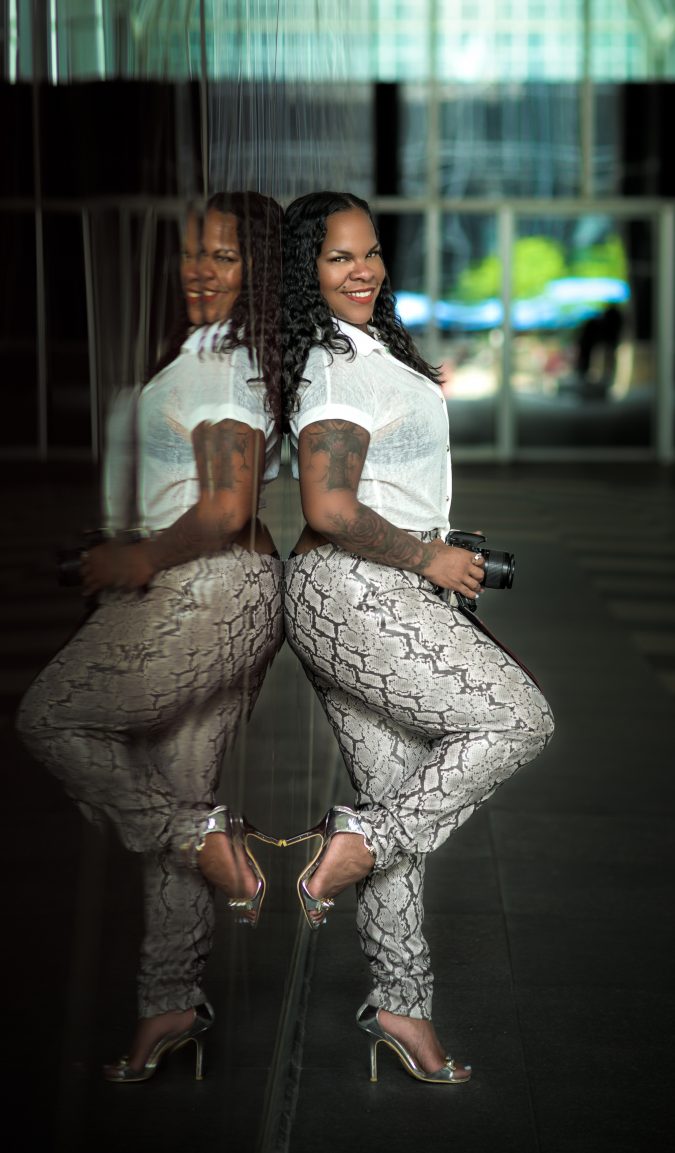 representatives and city council members. She’s been on the stage as artists have performed, like Jill Scott and Kirk Franklin. She also does weddings and opened her own  portrait studio.
But there was one thing left for Delgado to figure out. Who was her real father? She went to the online DNA testing company “23 and me” in June 2021 and soon realized that the
man who she had called her father for the first 13 years of her life was indeed her father, not the second man whom she said was “forced” to call her father in her teenage years. “My mother lied to me,” Delgado said. “And everybody’s dead now so I can’t even question anybody.”
But now, she knows exactly who she is. It’s clarity. “I’m happy that I didn’t come from evil, but then I’m like, damn, you lied to me all these years and stole my relationship that I could have had with my real sisters that I know that I have now…and I built arelationship with guys that I call my brothers that are not my brothers,” Delgado revealed. “That just adds to who I am.”
Delgado shared her story because she wants it to serve as a testimony for others who may not know what they want to do with their life, or may not have the financial means to attend college, due to a shaky or poor upbringing. But even with her childhood, Delgado loved photography. She took classes while at Steel Valley, and she would always have a camera with her during her high school days. The camera, along with a never-say-die attitude, has elevated her to where she is today. “If the little girl who was scared to get out the bed and go to the bathroom because there was a river rat under her bed can be a successful business owner today,” Delgado said, “anybody can!”