Home Fashion & Beauty Brittney Sharaun from America’s Next Top Model “Werks” with the Next Gen...

I began with Preview Models about four years ago at the very start of everything. I was initially brought in as a runway coach because I’m a professional model, but I ended up producing the shows, too.

I’m also a youth motivational speaker, so I tour around, talking to teens and speaking at conferences and schools. And then I also teach runway classes, plus I do a lot of mentorship and life coaching. 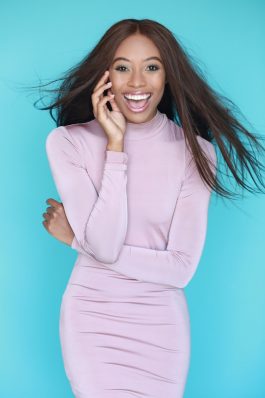 I’ve been modeling for ten years now. I got my start on American’s Next Top Model. I was a finalist on the show, and Tyra Banks discovered me!  At the time I had no modeling experience, whatsoever. I did not know what I was doing. Even after the television show, I still did not know what I was doing, but I at least learned how to get an agency.  After that, I got signed, and my career took off from there.

The modeling experience through Preview Models is about confidence. My runway classes are not just runway. I spend an hour with my students talking about confidence and identity and self‑worth, because it’s an ongoing process. It takes time. And for those who want to continue that, I offer my mentorship program.

Walking in a huge Hollywood fashion show makes it real for the models. They actually have to put into action everything that we talked about, everything that I’ve told them about confidence, self‑worth, and identity. And just loving yourself freely.

It definitely does boost their confidence and self‑esteem, and not just because the focus is on their physical appearance. It proves to them what they’re capable of doing. 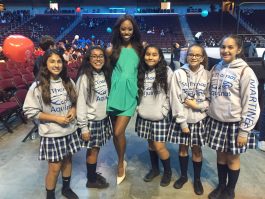 For a lot of them, it’s scary.  The first time you’re on a runway in front of a ton of people, it can be nerve wracking. But once you overcome that, there’s nothing you can’t do. I see so many people blossom—women, men, girls—and it’s awesome to watch.

I have become an empowered woman through my confidence and the boldness to just be myself. Especially today, there’s something very beautiful about a woman, about a man, about anyone, who is just empowered enough to be themselves. And it’s tough. It sounds so simple, but it’s hard to be yourself because we’re not perfect. But to be able to bare your soul and live in your own integrity is the greatest achievement!