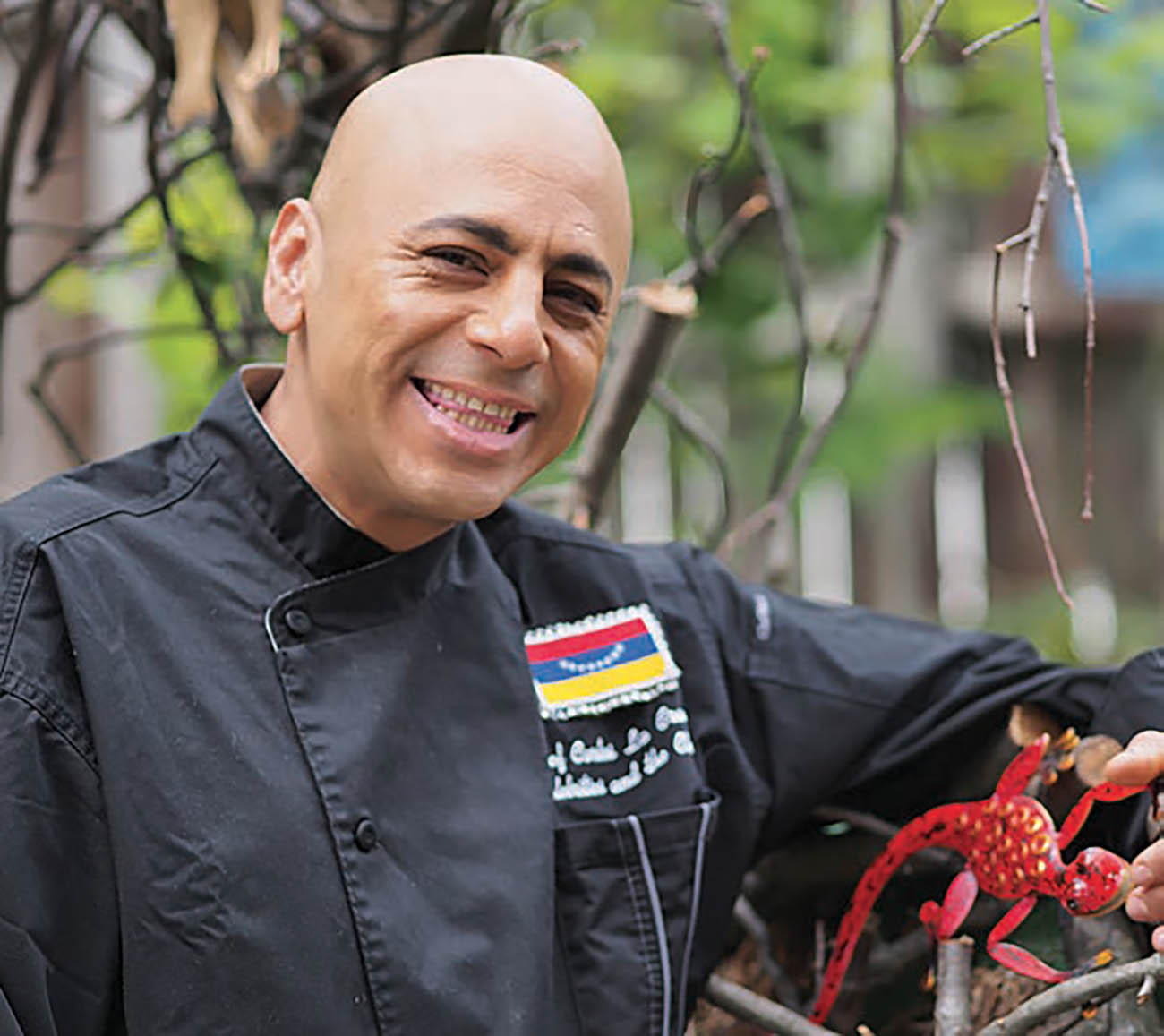 Born and raised in Caracas, Venezuela, Chef Carlos La Cruz sought to preserve the regional recipes of his homeland, as well as other Latin American countries and is developing a series of books that feature these recipes, starting with Bitacora Gastronomica de Venezuela I. For this book and its follow-up, he has recovered over 300 traditional Venezuelan recipes, which have been lost for two or three generations in some cases. The recipe for cachapas is among those featured.

To recover the recipes, La Cruz spent 8 years meeting with people in small towns throughout Venezuela, including his own grandmothers, Carme Maria Rosa de La Cruz and Rosalia Herrera. “It wasn’t easy,” he said, “but it was worth it to preserve this wonderful part of our culture.”

La Cruz is a restaurant consultant, award-winning TV chef, restaurant and club openings specialist, food columnist, cookbook author, and contributing writer for more than 20 publications. He will be honored with an excellence award at the Latin Community Awards 2017 this fall. La Cruz is a service director at Green Fig and The Green Room 42 in the YOTEL NYC.

Cachapas are thick pancakes made from maize (sweetcorn) and topped with margarine, a slab of queso de mano (hand cheese), a pork chop, and some chicarron (fried pork rinds) and washed down with a cold Polarcita (beer).

Cachapas are an integral part of Venezuela’s culinary history, and their origin dates back to pre-Colombian times when the indigenous population would grind corn with stone pestles and cook it cachapa-style on clay budares (flat griddle plates).

When I was young, cachapas could only be found in my home state—Bolivar—and were only made by locals installs on the side of the road on the way to la Gran Sabana.

One of my fondest memories of my birth country is when my mother, sister, and I would take a Sunday road trip that always included cachapas. These trips were a treat.

When we moved to the States, cachapas were one of the Venezuelan foods I missed the most.

Today, it’s easy to find cachapas everywhere in Venezuela, but the ones made in Bolivar are still the “originals.”

Heat a little oil in a pan. Finely chop the onion, and add it to the pan. Season, add the chili flakes and allow the flakes to soften for a few minutes.

Mince the garlic—I prefer to do it by hand so there’s no waste! Add to pan, and cook for a few minutes.

Drain the sweetcorn, add to pan, and allow to heat through before tossing in the parsley and mixing thoroughly.

In a large bowl, mix the cornmeal, baking powder, and salt. Pour in the soy milk slowly until you get the correct consistency—thicker than a normal pancake batter but still pourable. Lastly, mix in the sweetcorn mixture, ensuring it is evenly dispersed throughout the batter.

Wipe the pan clean, heat a little more oil, and ladle or pour in the mixture for 1–2 cachapas. Wait until it starts to bubble slightly, and then turn over for a minute or so until the other side is cooked.

Serve with natural yogurt mixed with a vanilla, honey, and berries.