1 POSTS 0 COMMENTS
I am a Creative Artist (Actress, Writer, Content Creator, Speaker, Filmmaker, Producer, and Sit -Down Comic because I'm not qualified to stand) that uses all forms of my creativity to influence the world, and people, and my audience(s) in a positive way. I have, also, been a Disability Advocate both Personally, and Professionally. I want to make a difference in the world, not only in my artistic endeavors, but in life. As a Performer With A Disability (PWD), (Cerebral Palsy) in a small way I try to represent the now, estimated 56 million Americans with disabilities in a positive and accurate description (Census 2008). The ultimate goal is to be recognized for my talents and artistic vision. It has become clear to me beyond being considered a character actor that it is my mission to show the world that uniqueness should be celebrated. Beauty is and should be considered more than just a Leading Lady being a dress size of two. It is my goal to get the industry and the world to shatter this standard, and sometimes stereotypical mindset to reflect a more contemporary, accurate view of the world. Why is a contemporary, accurate review of the world so important? Representation matters for all people & all unique body types. There has been a controversy for quite some time that Able-Bodied (Abs) actors be casted as characters with disabilities. This is Wrong! Why is it so wrong? The industry is taking away jobs, and benefits from people that are authentical. Performers With Disabilities are still not being given a chance enough just to be people without their disability being a factor. This is become vitally important because Performers With Disabilities are still not allowed to audition for roles, they are right for (meaning age range, and type) unless it is designated a disabled character. Until my Industry allows me to go out for every role in my demographic despite my disability, Able-Bodied (ABs) need to stop taking my roles & opportunities. I am a daughter, a sister, a friend, a shopper, I go to restaurants, the post office customer etcetera. So, why can't I portray this in film, television, infomercials, music videos and web series. The point is I am out living a life. That life should be represented and all faucets of the entertainment industry. 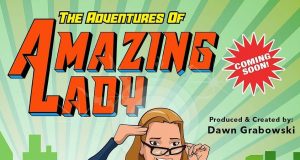 The Adventures of the Amazing Lady