1 POSTS 0 COMMENTS
Stacie Lawrence is what one would call a modern day renaissance woman. She carries an extremely busy schedule as a multimedia artist, a commercial model, and full time employee of the Pittsburgh Steelers. Stacie has been a part of the Steelers staff working in several positions since March of 1994. She had always been a creative individual, but did not consider herself an artist. All of that changed in 2012 when she decided to embark on a fresh start. She took an interest in runway modeling and artwork. This pivotal decision unearthed talents and desires that had always been within her. Modeling had always been a passion for Stacie and served as an extension of her creativity and self-expression. After modeling for several designers, she soon began receiving requests to design clothing and jewelry for the shows. She quickly became the only designer/model in the group. During that time, Stacie worked vigorously to define other aspects of her creativity, working with established artists, taking classes, and absorbing any information she could to help further define her crafts. Several individuals urged her to focus on a single discipline, but she is happiest working with several mediums at a time, allowing her the freedom of creation she desires. Stacie has a unique connection to Africa, one filtered through the Caribbean and one from the southern part of the U.S. Both cultures have defined her as a person and an artist and are often organically found in her artwork. She extends herself creatively working with fabric, glass, wire, paint, wood, and repurposed items. She has also taken an interest in photography to enhance her artistic experience. Stacie’s goal is to continue her full-time career in sports, enhance her commercial modeling experience, and create further visibility of her artwork by working with local foundations in the area. Stacie would like her creativity to shine a positive light on the world of others. Accomplishments and events: Nominated for Pittsburgh Magazine’s Pittsburgh Artist of the year. 2021 Featured artist-“ We are the global majority”. Space Gallery-Pittsburgh Arts Festival, hosted by #NotWhiteCollective. August 2021 Assisted in Mural for Tree Pittsburgh. July 2021 Featured Model- “Big Faces” @ BLaqk House Collective. Tom Mosser. 2021 Resident artist for Legacy Arts Project. Produced film featuring poetry, artwork, performance and autobiography. April 2021 Featured artist- King of Kings Still life’s Beaute artist collaboration. 2018 Sold and exhibited artwork at JOLO Boutique in PIttsburgh PA. 2015-2017 Upcoming solo exhibit “One Woman” at Songbird Artistry. September 2022 Sralart@gmail.com FB & IG: IB_Stac 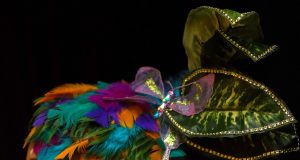