1 POSTS 0 COMMENTS
Supriya Nagarajan, is the founder and CEO of Manasamitra, a UK-based arts organisation with global reach. She is one of the most sought-after Carnatic vocalists/composers in the UK and has performed around the world in India, Thailand, Cambodia and cities across Europe and the UK. Known for working in unusual, non-traditional performance spaces, she strives to engage and inspire new audiences and bring them unique cultural experiences. Supriya has collaborated with musicians from different genres and disciplines and been commissioned to create music responses to artists including Andy Goldsworthy, David Nash. From banking to music A Bombay-born Indian musician who studied Carnatic Vocal (classical South Indian) music from the age of five, Supriya initially built up a successful career in the UK banking sector. In 2005 she changed direction and founded Manasamitra to fulfil her passion for music and traditional and contemporary Indian art in order to give UK audiences an ambience of India, its tradition and culture. Today, Manasamitra generates, produces and delivers challenging, thoughtful and provocative programmes across all genres and cultures. Its aim is to pioneer new performance vocabularies through multi-disciplinary collaborations and develop new audiences – including children, young people and families - within social and community settings across the UK. Previous performance locations have included Yorkshire Sculpture Park, York Minster, Huddersfield University, National Railway Museum, Tatton Park, Kew Gardens, Sage Gateshead, Queen Elizabeth Hall, Wigmore Hall Kings Place and The Royal Albert Hall. Creating a new musical vocabulary Supriya has performed and worked with a number of global artists across vocals, dance and storytelling from diverse cultures to produce dynamic artistic collaborations. These collaborations respect and challenge the ideas, forms and aesthetics of each genre whilst producing performances representative of the artistically rich, melting pot world we inhabit. Supriya’s latest projects include: Mapping the Music – A musical response to Barbara Hepworth’s works commissioned by the Hepworth gallery. Slumber Stories – A musical story telling ritual for families drawn from stories and sounds from across the world that toured libraries in Kirklees and opened the IMAGINE festival at Southbank Centre. The Sound of Tea - a multimedia music project which explores the tradition of tea through music, performance and digital technology. Lullaby Sonic Cradle - a contemporary musical exploration of night-time sounds interspersed with lullabies from India and audio recording gathered from communities across the UK and Europe. The lullaby project toured the UK in 2018-19 and has many international editions in Europe, Scandinavia, India and Australia Bollywood Jazz - a new Indo-Jazz music fusion inspired by the songs and instrumental music of Bollywood films, which culminated in a UK tour in 2018-19. Shivoham - a unique musical experience that is rooted in India but reaches widely through its contemplative nature and universal narrative. Supriya’s tour of Shivoham in 2013, with Ben Castle and Shri Sriram, was a ground-breaking collaboration. Reykjavik to Jaipur In October 2017, Supriya began work with the Iceland Symphony Orchestra, taking lullabies to schools across Reykjavik. Supriya was commissioned to create two pieces of music to be included in the orchestra’s ongoing repertoire and debuted at a showcase event in the country’s capital. Working closely with conductor Viktor Arnason, Supriya also worked with former Eurovision contestant, Greta Salome, who was also commissioned to create new work for the showcase. The showcase was held at HARPA in Reykjavik in 2017. Supriya has been involved with Huddersfield Contemporary Music Festival over the years. In 2014 Supriya hosted creative family workshop, Hālaraḍuṁ Songs, exploring lullabies from around the world. Taking to the stage in 2016, she performed musical theatre piece, The Life of a Bee, working with an early year’s specialist to explore music, dance, theatre and crafts under the theme of ‘bees and the environment’. In 2018, Supriya brought Canopy of Voices to the festival, the world premiere of Pleiades Ne Maia, a performance inspired by the luminous seven-star cluster that is featured in cultures worldwide. Canopy of Voices was created in collaboration with HOOT Creative Arts Choir, University of Huddersfield Choirs, York Stonegate Singers as well as a choir made up from the refugee and asylum seeker community. Supriya completed a research residency at the Kingsbrae Gardens, New Brunswick in 2018, working on the theme of “Bees and our environment”. She also worked closely with a Cultural Olympiad project, Stanza Stones, exploring the Yorkshire Moors, the poetry of Simon Armitage and Indian classical music. In January 2020, Supriya appeared at the Jaipur Literature Festival performing a confluence of Carnatic and electronic music which was attended by over 500 people on the front lawn of the Diggi Palace. 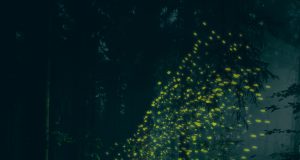 The Fight to Save the Night Sky