1 POSTS 0 COMMENTS
Vasu Pawar is the CEO/Founder of Step2StepUp Inc, a 501 (c) (3), Non-Profit organization focused on supporting young Entrepreneurs by way of financial support, training, mentoring and guidance. Vasu is a proud Entrepreneur herself, having engaged in various business industries including shoes, ceramics, housewares, technology, and apparel. She also owned two Indian Restaurants in Los Angeles. After having experienced the tug of war between business success and failure, Vasu has committed herself to helping every young Entrepreneur in the nation rise and dominate. In addition to Vasu’s passion for small business, she has devoted over 35 years to the world of Finance as a Finance Controller in the areas of Import/Export, Manufacturing, Distribution and Engineering. Vasu has greatly increased each company’s financial threshold throughout her tenure. Prior to that, she was a High School English and Math Teacher both in India and the USA. She holds, a Master’s Degree in English Literature, two Bachelor’s Degrees in Computer Science and Education and a Minor in Geography. The Bridge 2 Unity is a celebration and a Tribute to 24 of the strongest Women in our nation who have positively impacted their individual industries through their ingenuity, passion, and an unwavering work ethic. It is our goal to inspire, educate and motivate the entire nation to fearlessly step out of their comfort zones and rise. Vasu accredits her strong work ethic to her parents unwavering focus on education and self-improvement. Both parents never allowed any of their children to hold back any of their talents. 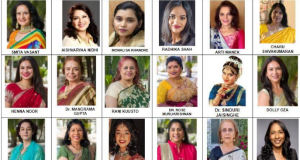