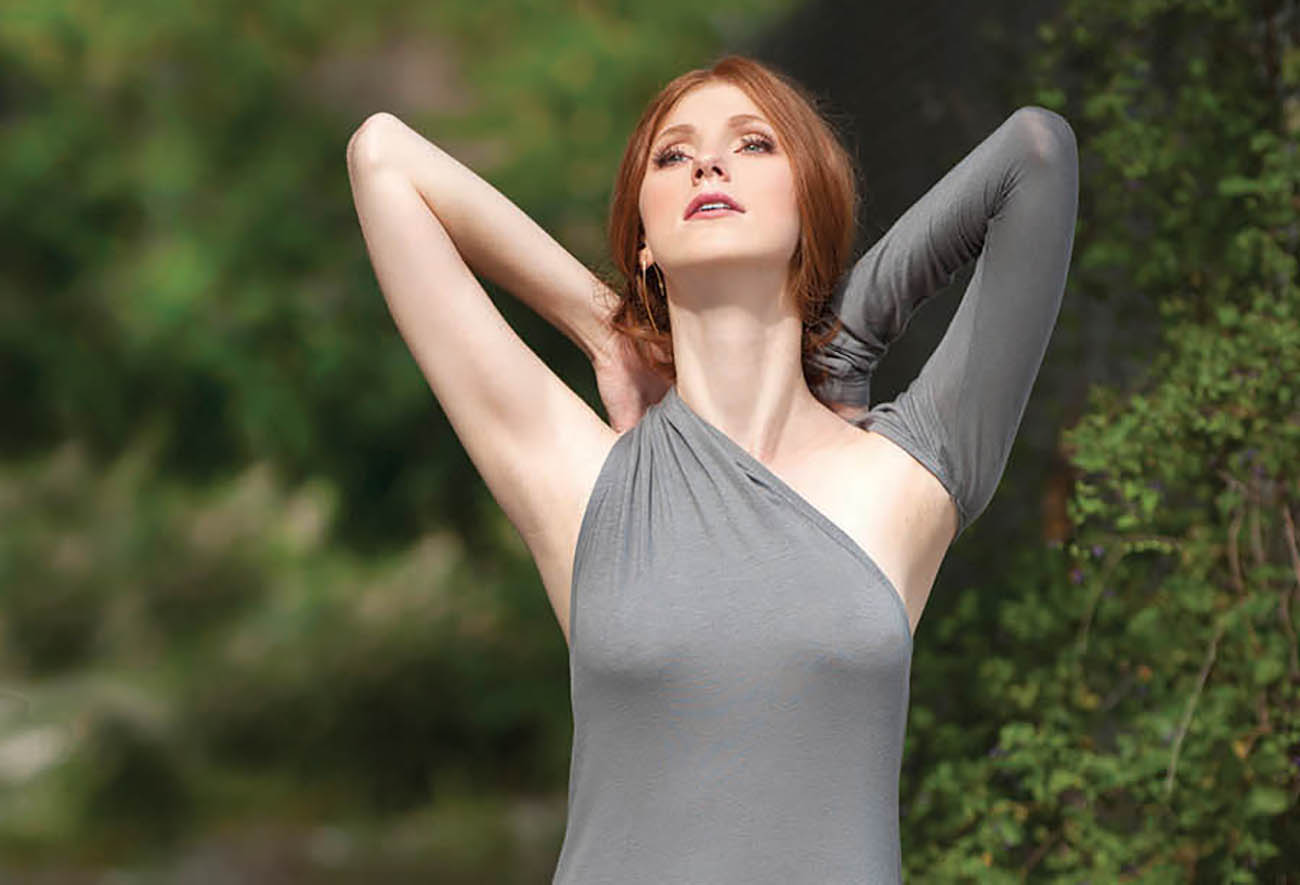 Kiya Tomlin was born to be a designer. The New Jersey native has tried many different things, other things she felt at times she “should” be doing rather than something that she wanted, but ultimately, fate put her in the place that made her the happiest.

The owner of Pittsburgh-based Uptown Sweats recounted the long road that brought her to owning her own fashion line and retail store.

“I started sewing and designing when I was 11. Nobody else in my family sewed or designed or even cared about fashion, but I had this interest in it. So I got a sewing machine, and my mom dusted off her eighth grade home economics knowledge and taught me how to use it, and we did one project together: a little mallard [stuffed duck]. After that I was like, ‘I want to do a jumpsuit!’ So I’ve been making clothes ever since.”

Tomlin quickly went from pattern books to forcing her own images together. She eventually attended design school at the University of Cincinnati’s College of Design, Architecture, Art, and Planning (Cincinnati, Oh.), but that was only after she got back on track from a detour in her design path.

“I went to college on a pre-med scholarship to William and Mary (Williamsburg, Va.). So when I went to design school, that was my second round of school. I already had an undergraduate degree. When I got married right out of college, I decided not to go the med school route. I’m not really sure why. It didn’t fit into the life we were living at the time.”

“So I still designed and did stuff on my own. When my aunt had breast cancer and lymphedema, her arms swelled really big. So I did a fashion show for patients with lymphedema, and I made stuff for them because they couldn’t buy.”

“We were living in Arkansas at the time, and my husband [Pittsburgh Steelers Head Coach Mike Tomlin] was coaching at the University of Arkansas in this really little tiny town of Jonesboro, only 50,000 people. I was having a hard time fitting in and finding something to do.”

It was then that Tomlin began researching design schools. When her husband was hired as a coach at the University of Cincinnati, she was able to attend their College of Design, Art, and Architectural Planning. While she didn’t graduate, she was able to take the core classes she needed, tuition-free, for two years until the Tomlin family moved to Tampa, Fla., for Mike’s first NFL job. Kiya had looked into other schools, but since college was no longer free and the couple had recently had their first child, she decided to concentrate on actual design.

“So I just started making stuff,” Tomlin remembered. “I did baby stuff, and I just loved to do it, so I would do it for free. Probably after the third free wedding gown, my husband was like ‘You will not do another free thing!’” Tomlin laughed. “So I was forced to start a business.”

Tomlin started a business making wedding gowns in 2000. She kept that going for about two years, but the stress of designing wedding dresses was compounded after the arrival of the Tomlin’s second child. Not long after, the family moved to Minnesota for another NFL job, and their third child arrived. Then the Steelers’ head coaching job brought the Tomlins to Pittsburgh, Pa., a decade ago. Tomlin was busy for quite some time just being a mom to three young children, but as they grew older, she realized she wanted something for herself.

“After we moved to Pittsburgh, I kind of put it aside for a little bit because I had three kids in a new city, and a new lifestyle with Mike being more in the public eye and, you know, tending to the kids. Then after my last one was getting ready for kindergarten, I started looking around like ‘What am I going to do with myself? You know, it’s time to start doing what I want to do.’”

So she decided to get back into design “just lightly. It will give me something to do. Something to focus on, and then by the time the kids are grown and ready to go off to college, I’ll jump in full-time and full-force. I guess I was preparing for the empty nest. I had a lot of people around me at my husband’s job who were much older than us, empty nesters…The husbands work so much [coaching], that [their wives go] from running an entire household like a single parent to having an empty household, and I saw a lot of women struggle with it. And I was like ‘I’m going to get myself squared away before that happens.’”

The first season of Uptown Sweats was 2014 fall/winter. Tomlin started the business from home but quickly realized the conditions weren’t ideal for her. Tomlin said it was odd doing the business from home, working with clients, etc., when so many people knew who her husband was. It also was a distraction. As a working wife and mother, it’s too easy to want to load the dishwasher, clean, throw in a load of laundry, or do other housework instead of actual work. It was definitely time to move.

Tomlin initially leased a room in an interior designer’s showroom. She worked from that space for about a year. She enjoyed being out of the house and soon felt confident enough to begin searching for her own space. An up-and-coming area in the East Liberty section of Pittsburgh ended up being perfect, but not for the reasons one would think.

“I kind of casually started looking and stumbled upon this space,” Tomlin explained. “which I fell in love with because of the windows. The neighborhood was not developed yet. I didn’t even know there was a plan. Nothing had even started happening. This building was completely vacant, but I just loved the windows, and I figured if I’m going to be somewhere all day, I want to be able to soak up the sun.”

While boutiques had previously carried Tomlin’s creations, her store is now the only place you can find her designs, along with select trunk shows. Her lines are exactly what the name of her brand implies: they are clothes you can use for a meeting or occasion that requires you to dress up, but they can also be casual. Plus, they are machine washable. Tomlin realized the need after working from home for so long.

“As much as I love fashion, I got tired of getting dressed. When I worked from home, I could just work in my pajamas all day if I wanted to. But now I had to get dressed and meet clients, and wearing professional clothes was not compatible with my lifestyle, with the type of manual labor that I do, plus running the kids and multitasking and my crazy busy day.”

“So I’m like ‘you know what? I’m going to make a dress that works for me and that I can go to work in and be presentable, but I can still run the kids, I can still climb on top of the cutting tables. I can still do all this stuff, and at the end of the day I can just throw it in the washing machine and not worry about dry cleaning or if I spill something.’ So I designed what’s now called the Signature Dress, which is the sweatshirt dress. It was really just for me, but when I would wear it, people would stop me left and right and ask where I got it. So I thought I would make some of these and just keep them in my studio for some custom clients if they want to buy them on the side. Also, when people would knock on the door just to see what I did, there was stuff they could buy.”

Through making those dresses, Tomlin also learned the processes of pre-work and ready-to-wear. She learned about designing dresses and sending the design off to someone else to make multiple copies of it into actual clothing in different sizes. Now she has a storefront for her line where she can show customers how to mix and match pieces and, most importantly, where customers can give her direct feedback.

Tomlin is also starting to have her pieces manufactured locally.

“We started making last season’s line here ourselves. It’s always been in my plan to manufacture locally because I can be more hands-on. I can be more attentive to it, as well as eliminate a lot of the waste—whether it’s leftover waste or producing more than I need—because when you go to another factory, they have minimums. So you’re kind of stuck making X amount. Well when X amount doesn’t sell, I just don’t want to work that way. It’s very wasteful.

So it was always my intention to bring a factory here. Then I had some logistical issues with my mill in Los Angeles where they had a machine break, and I couldn’t get the fabric to the factory in time to get it out to some international orders for stores in Europe. We had to get those orders to Europe, so I just had the fabric sent here, and we leased a space and cranked those out.” As a result, Tomlin’s factory will be coming sooner rather than later.

As for Tomlin’s upcoming spring line, she says to expect lighter fabrics.

“For our spring line, we lighten the fabrics, to a super lightweight jersey modal. We kind of recreated some of our other styles in a lighter weight, and a little bit drapier. We’ve got a nice neutral, light color palate. To me it’s more…more uptown!” Tomlin exclaimed satisfactorily.

It may have taken some time to get to the place she is now, but the forces of the universe knew where Tomlin belonged all along. She was meant to grace the fashion world with her incredible presence. What advice does she have for others who hope to follow their dreams? “Figure out what you love to do and find a way to make money doing it.” The more she sticks with it, the bigger she grows. Expect big things out of Kiya Tomlin and Uptown Sweats not only this coming season, but in the long-term future as well.