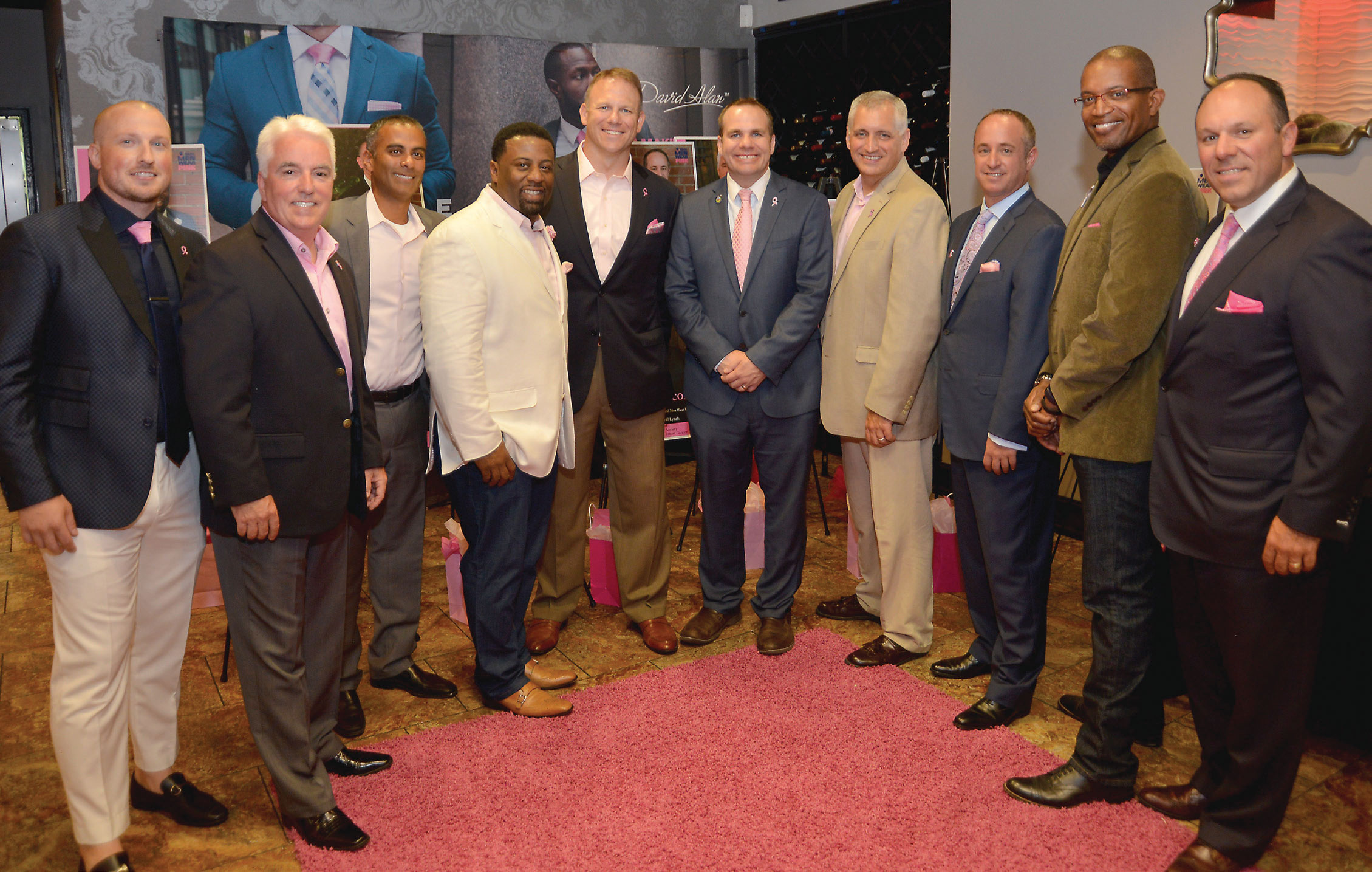 I see nothing wrong with a bunch of men wearing pink, especially when they are raising money for a good cause.

Some very giving members of the Pittsburgh, Pa., community came together at Savoy Restaurant on August 17th for the Real Men Wear Pink Reveal Party to benefit the American Cancer Society (ACS).

Candidates are chosen to raise funds to “create a world free from the pain and suffering of breast cancer.”

Inspiring Lives Magazine’s own Dr. Shellie Hipsky, Kelly Frost, and Samantha Barna attended the event and interviewed some of the people involved about why eradicating breast cancer means so much to them.

Gladys (survivor) on the time she took her wig off mid-speech: “I planned it so meticulously. I told [NFL Hall of Famer and son] Jerome the night before, ‘I want to do this, what if I just wore a hat instead?’ He said, ‘No Mom, don’t wear a hat. They know you don’t have hair under the hat. They can see that.’ So I went in with my makeup flawless, my clothes were cute. I just wanted to look the best that I could possibly look. I had the blonde wig on, and I just looked so cute! When it was time for me to speak, Jerome introduced me. I got up there, and I said ‘Ladies, I am so happy to be here. I’m going through my last chemo,’ and I said, ‘excuse me one second.’ And I reached up and took that wig off and laid it down on the podium. They just started screaming. It was the best moment.”

John on how he supports his mom: “I’m a constant communication type of person, and I love my mom. I talk to her every day. She’s in Detroit, and I’m here, but I call her. She calls me. A part of my support was just talking about it and making sure I was there. Then, every other weekend, I’d go out to see her and my daughters. And Jerome, he can’t always be there, he’s the busiest guy, so I’d go out and be with her and represent the both of us. I always have her best interest at heart. Whatever I’m doing, I’m thinking of her.”

David Alan (Designer, davidalanclothing.com, properknot.com): “I’ve had several family members pass away from cancer. My grandmother passed away before I ever met her. She died when she was 50 years old. My godfather passed away a couple years ago, he had prostate cancer. I also had a cousin pass away a couple months ago. He died within three months of being diagnosed. A lot of people pass away far too young. It’s been an emotional couple of years with all of that. To have the opportunity to work with the American Cancer Society was a no-brainer for us.”

“When I was younger, I thought I was invincible. I thought my family would be around forever. The older you get, you realize they also get older and things do happen. Fortunately, you can be proactive. Nobody’s invincible, and I would just say if you have something that you feel isn’t right, or if you have a family member who is complaining about something, make sure they get checked out.”

Mike Neal (Executive Vice President, East Central Division, American Cancer Society): “What an amazing mission we have at the American Cancer Society! We do so much for so many people. I’ve been able to meet so many who have gone through this battle, and I really watch their journeys. I get inspired by them, and because of that, it drives me every day. I tell people ‘it’s not even my job: it’s what I do and who I am to work here and be a part of it.’ The network of volunteers and staff, along with the people we serve, they all make me a better person. I love it. I also feel like, if you look at the history of the ACS, no one has made a bigger impact in the fight against cancer anywhere than the American Cancer Society. We’ve been around for 100 years, and if you look at every major finding in cancer research, the ACS’s fingerprint is on it. I’m really proud to be connected to that. That’s what drives me.”